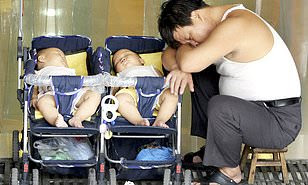 A Chinese man is left stunned after finding out that his twin babies have two fathers. The parent, who remains unidentified, made the shocking discovery after taking the newborns to undergo a DNA test as part of the standard procedure to register their births in China, a DNA analyst told reporters.

The man was astounded upon receiving the test results which indicated that his wife also had sex with someone other than him, Chinese media report.

Deng Yajun, the practitioner who produced the paternity report, said that the chance for such case to happen is one in 10 million.

'First, the mother needs to produce two eggs instead of one in the same month [to have twins],' Ms Deng, who is also the director of Beijing Zhongzheng Forensic Identification Centre, explained to China News Weekly.

'Second, she needs to have intercourse with two men in really short space of time to make it possible.

'The results showed that the children have the same mother but not the same father. They have at least two fathers,' Ms Deng suggested.

Twins being born with different fathers is an extremely rare occurrence known as heteropaternal superfecundation.

Women usually have to have sex with two different men within a day before or after ovulation for both eggs to be fertilised.