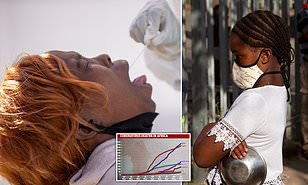 Africa's young and fit population will help the continent avoid an enormous death toll from Covid-19, according to figures from the World Health Organization.

Analysis from the UN's international public health body predicts more than a quarter of a billion Africans will contract the SARS-CoV-2 coronavirus within a year.

It claims that the Covid-19 death toll will likely reach up to 190,000 -- significantly fewer than the forecast loss of life in America, and roughly on a par with Europe.

Africa has a population of around 1.2billion people whereas Europe is home to just 700million individuals. Africa has around 900million more residents than the US.


The US has already recorded more than 86,000 fatalities related to the pandemic, and the death toll could reach 225,000 by August, according to the US-based Institute for Health Metrics and Evaluation.

The WHO's mathematical model studied 47 nations and expects over a fifth (22 per cent) of Africans to contract COVID-19, a figure totalling around 264 million.

Of these infections, up to 44million people will express symptoms of COVID-19 and up to 5.5million will likely be admitted to hospital.

Scientists also warn the virus will be hard to eradicate completely in Africa and may linger in communities for several years. 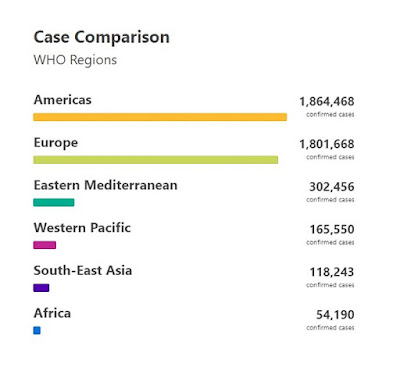 Egypt is the African country with the highest death toll so far, with 571 Covid-19-related fatalities. South Africa has the most infections, with almost 13,000 confirmed cases.

Data analyst Humphrey Karamagi told The Guardian that Africa has a young population compared to other parts of the world and this will help keep the transmission rate down and reduce deaths.

Africa also has low levels of obesity which doubles the risk of dying from COVID-19, according to a recent British study.

'The biggest factor that plays out in our numbers is age,' explained Mr Karamagi. 'We also have very few people who are obese, although the numbers are rising. But not at the levels in the US.'

The piece of research, powered by the UN's dedicated health branch, did not include data from Djibouti, Egypt, Libya, Morocco, Somalia, Sudan and Tunisia.

The WHO study, which has been peer-reviewed and accepted for publication in BMJ Global Health, claims the spread of COVID-19 throughout Africa will be considerably slower than Europe and the US.

Despite a lesser impact than other parts of the world, the knock-on effect on public health will be significant, the analysis claims.

A rise in hospital admissions will strain services, and programmes dedicated to tackling other health concerns such as HIV, tuberculosis, malaria and malnutrition, will suffer most from the added strain induced by COVID-19, the study authors say.

Smaller African nations will be most at risk, with Mauritius likely to be the hardest hit.

Seychelles and Equatorial Guinea will also be severely affected, with the scientists expecting them to the second and third most infected countries per capita, respectively.

Of Africa's largest countries, the research predicts Cameroon, South Africa, and Algeria would be most at risk from severe outbreaks.

Nigeria is set to have the largest number of infections overall but not the most per capita, by virtue of having by the largest population in Africa with almost 200 million individuals, approximately a sixth of all Africans are from Nigeria.

Algeria and South Africa will have the second and third highest amount of infections.

However, less urbanised countries such as Angola, Botswana and Mozambique are poorly connected and infection spread is therefore likely to be limited.

But if the virus does spread in these countries, they are likely to be harder hit.

Previous research conducted by a team of African scientists found Djibouti -- a country with a high population density -- is predicted to be the African nation with most infections per capita. The most recent WHO analysis did not include Djibouti.

This previous study, released last month, found that more than 16million Africans will likely be infected by the end of June.

Swaziland (26.8), Morocco (11.97), Algeria (9.8) and Cote d'Ivorie (6.65) make up the five countries with the most predicted infections per capita, according to this independent analysis.

Researchers agree that the most urbanised and wealthy countries will experience a faster growth of the epidemic.

Countries such as Tunisia, Morocco and Egypt were singled out as fitting this criteria, but none of these likely hard-hit nations featured in the WHO analysis.

Limited capacity to test and diagnose patients and poor data collection will hinder efforts to stamp out the disease, especially in rural areas, according to the World Health Organization.

'These system capacity challenges highlight the need to ensure the success of the containment measures to avoid the need for mitigation measures that, despite relatively fewer cases expected in the Region, will be difficult to institute,' the researchers write in their study.