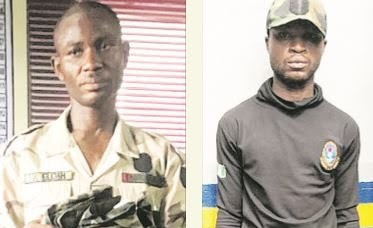 Police in Lagos have arrested two FAKE soldiers Kehinde Elijah, 45, and Eze Joseph in connection with the killing of a police sergeant, Onalaja Onajide.

Onajide, who was attached to Ilemba Hausa Division, Ajamgbadi, was gunned down about 9:30pm on May 10 in front of the division.

It was gathered that the suspects were apprehended at the weekend by a team led by Divisional Police Officer (DPO) Yahaya Adesina, a Chief Superintendent (CSP), said to have witnessed the incident that night.

The Nation gathered that Elijah, a dismissed soldier sacked for deserting the battle against the insurgents in the Northeast, paid frequent visits to the police station pretending to be a serving soldier.


The suspect, police sources said, was being watched after his motorcycle was impounded that day and later in the night, a Lexus Sports Utility Vehicle (SUV) carrying men dressed in military uniforms was spotted around the division shortly before Onajide was shot.

The Nation gathered that Elijah had visited the division several times in full military attire but was eventually arrested Saturday evening when he was taken before the DPO who figured he was an impersonator.

He was said to have confessed during interrogation that he deserted the army with his firearm and other military accouterments including three military uniforms.

Similarly, in the course of investigation, Joseph, a resident of Imude Pako in Era Road, Ajangbadi was trailed to his residence where three other impersonators allegedly fled and the police recovered three other army uniforms. 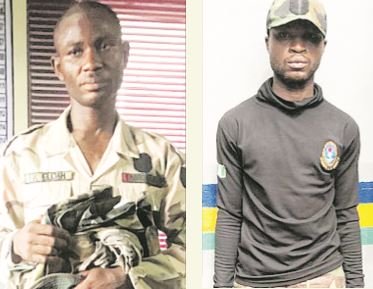