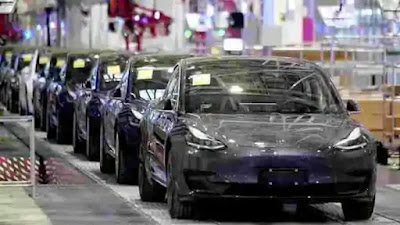 A German national accidentally purchased 28 Tesla Model 3 vehicles online amounting to a whopping  $1.4million, reportedly due to a technical glitch on the company’s website.(Wapbaze_Copyright)

A man, who identifies himself as “Ballon-Man” on Reddit, took to the online platform to share the anecdote about his family’s “accidental purchase”.(Wapbaze_Copyright)

The Reddit user and his father wanted to buy just one Tesla Model 3 car with autopilot and ended up buying 27 more units of the same model.(Wapbaze_Copyright)


According to Ballon-Man, while they were purchasing the car, an online glitch must have occurred, due to which their order could not be placed even after clicking on 'submit'. The website kept responding with messages showing payment issue, although they had duly filled all the payment details correctly. The father and son kept clicking on the “confirm” button, but the same error kept popping up on the screen.(Wapbaze_Copyright)

This went on for nearly two hours and by the end of it, when the website responded, it confirmed orders for 28 units of the Tesla car. What made them more anxious is that each order they placed had a minimum no-refund fee of 100 Euros, which meant they would have to shell out thousands for no fault of their own.(Wapbaze_Copyright)

However, according to the Reddit user, Tesla acknowledged their problem and agreed to cancel the entire order free of cost. A fresh order had to be placed by the family later to purchase a single unit of the Model 3.  😂😂