10 Doctors, 6 Journalists Arrested In Egypt For Speaking Out About Alarming Coronavirus Crisis 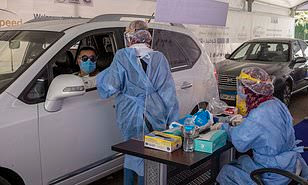 Egypt has arrested at least 10 doctors since the start of the coronavirus crisis and warned health workers they could be punished if they speak out.(Wapbaze_Copyright)

Security agencies have tried to stifle criticism of president Abdel Fattah el-Sissi and his government's handling of the pandemic, which has caused 76,253 infections and 3,343 deaths in Egypt - the worst death toll in the Arab world.

Doctors have been voicing anger over shortages of protective gear and an apparent government attempt to blame them for the spike in deaths.(Wapbaze_Copyright)

At least 10 doctors and six journalists have been arrested since the virus first hit Egypt in February, according to rights groups.(Wapbaze_Copyright)

President el-Sissi has stamped out dissent since leading a military takeover in 2013, jailing Islamist opponents as well as secular activists and journalists.(Wapbaze_Copyright)

One foreign correspondent has fled the country during the virus pandemic, fearing arrest, and another two have been reprimanded over 'professional violations'.(Wapbaze_Copyright)

The military has set up field hospitals with 4,000 beds, scaled up testing and ordered companies to churn out face masks and other supplies.(Wapbaze_Copyright)

But doctors say they are forced to purchase surgical masks with their meagre salaries, while families plead for intensive care beds.(Wapbaze_Copyright)

Health workers in Egypt say they have been warned by administrators to keep quiet or face punishment.(Wapbaze_Copyright)

One doctor in greater Cairo said: 'Every day I go to work, I sacrifice myself and my whole family. Then they arrest my colleagues to send us a message. I see no light on the horizon.'

The pandemic has pushed the Egyptian Medical Syndicate, a non-political professional group, into a new role as an advocate for doctors' rights.